PardonmyfrenchNYC is a new company producing bi-lingual radio shows by French speaking New Yorkers who share with Francophiles all over the world their freshly acquired multi-cultural vision of life. The goal of PardonmyfrenchNYC is to bring together different national, ethnic and social groups under an umbrella of one language in order to express immigration experience and build community.

Our expats are sharing their American adventure with emotion and humor, starting with NY. What did they bring and what made them stay? We discover a “before and after“ tutti frutti of thoughts, tastes and concepts. Dominique de Cock, Tamara Zoubof and Hassania Kone are questioning them on their new vision of life. These are our “rendez-vous” in NY.

Tamara Zouboff was born in Belgium - not that long ago :) Tamara is of French and Russian heritage. After studying photography and working many years in that field, she moved to the not-for-profit sector in NYC where she worked for nine years. Tamara is ready for that new PMF adventure. She lives with her husband Tylor and son Oscar in Manhattan, the greatest playground in the world.

Hassania Kone was born in Paris to a family of Moroccan immigrants. She is a health food specialist and enjoyed working in garment design and trade with international companies. Her bittersweet immigration to NYC in the late nineties made her an advocate for women's rights and people in need. She brings to PMF her ironic view on current events and knowledge of all social services in NYC.

She is married and lives with her two children in Harlem.

Dominique de Cock was “imported” by her husband from her native Belgium to the US in 1991. She is Director of Design at Jolie Papier Ltd. and the theater Production Designer for the East End Special Players. Once the nest was empty, Dominique moved from East Hampton to NYC in 2009. She then conceived and co-founded Pardon My French. She is thrilled to host PMF shows bringing the joie de vivre of the French expats to the Francophiles du monde. 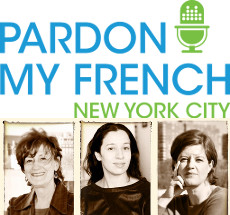